I have another round of Mediterranean vibes here for you in today’s post about Lisbon – Portugal.
Last year around my birthday I got the travel bug again – big surprise, really – and since this special day is in May, the weather is already okay-ish in most of the European countries, I told my friend, look… let’s go somewhere warm and nice. Took me probably 10 seconds to convince her, and we chose Lisbon. The tricky part of this whole planning was only just a tiny, minor detail that my friend is living back home in Hungary, yet I am in Manchester. (Bestie missed out on this trip due to financial difficulties… lol) But I was like, no probs, challenge accepted. You will book your flight from Budapest, I will go from Manchester, we will meet and yay.

…Bestie missed out on this trip due to financial difficulties… lol

This trip was my very first AirBnB experience, I am not gonna lie I had my concerns after reading all the horror stories about Couch Surfing and similar accommodations. Anyway, my friend said they used it in Barcelona and it went well, and really it is worth it, cheaper and everything. So I was like fine, we only live once anyway… Rather die in Lisbon than in Manchester…

The day has finally come for me too, cuz my friend arrived 2 days before me, she turned into a local person by the time I arrived. My flight was a late one, I landed around 11pm, so I saw the sunset from the plane. Looking out of an airplane window is my favorite view anyway, but this one was just amazing, the moon was already showing with the last rays of the sunshine… 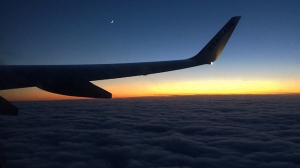 After I landed I decided I am not gonna wander around at midnight in Lisbon. When I’m traveling alone, especially late night, I always try to use an Uber – better safe than sorry – although there are 5 different bus that takes you from the airport to the center for few €. Anyway, I hopped into a taxi, which is not that expensive in Portugal, it was less than 20€, which is fine, compared to Paris for example where you have to pay minimum 50€, or in London where one of my friend got literally ripped off and had to pay 90£. Bless. Oh, and the Portuguese driver spoke English, was very polite, he became my tour guide in a second, he was telling me all about the history and where can I find the typical touristic stuff, what’s worth it, what’s not. It was a pleasant ride. Aaand finally we made it to my temporary casa, where my friend was already waiting for me with vinho and vodka. Happy Birthday to me.

Next morning we woke up with a massive hunger after all the wine. My friend said she discovered the Time Out Market nearby our flat, and a little pastry shop called Manteigaria which is selling the famous Pastéis de Belém – or Pastel de Nata- it is a Portuguese egg tart and it’s literally everything. 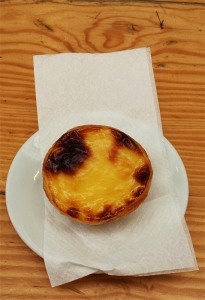 … Not my best food picture ever, for sure. But it’s fine enough just to give you an idea of what I’m talking about. Later on our trip to Sintra, we discovered another sweet bite of sugary joy from heaven – exaggerate much? – called Queijadas Finas, or Queijadas de Sintra. These are cheesecake tarts. Hold my hand. It’s like Sophie’s Choice… I can’t decide which is better I swear. I just want to go back and live purely on these, but never get fat. Can I? 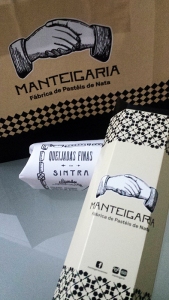 After our well-deserved breakfast, we started our day of sightseeing. We were walking around – and took the classic Lisbon tram journey which passes through the popular tourist districts – the city also has a metro line, but I’m not a huge fan of that type of transport as a tourist, mainly cuz you are underground facing a concrete tube. Plus the tram is sort of like the main symbol of Lisbon and it’s an experience itself. Needless to say, I immediately caught all the Mediterranean vibes that always makes me buzz, I felt like home and fell in love with the city. It reminded me a little bit to Madrid with its colorful buildings, parks, bars, and cafes. 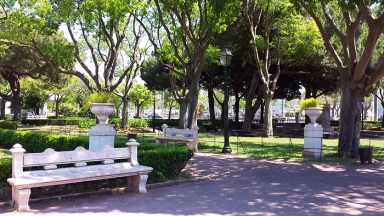 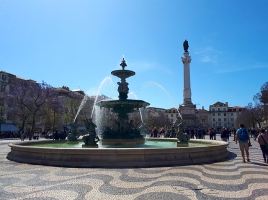 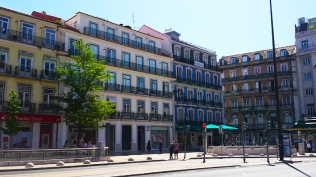 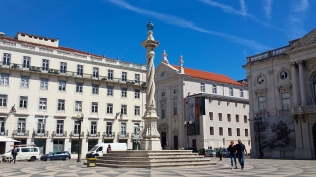 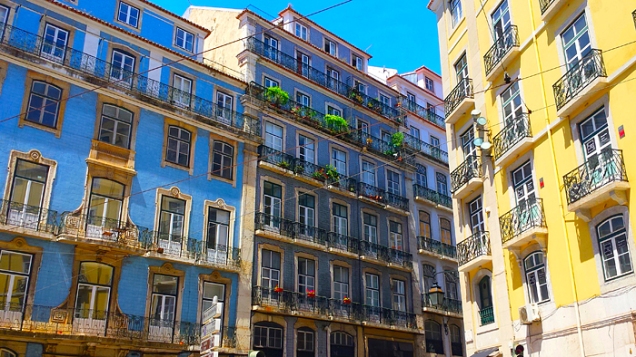 There’s something about these buildings that makes them special and it’s worth to be mentioned: the Azulejos aka. the Portuguese ceramic tiles. They are everywhere and decorate literally everything from walls, churches, houses, shops, and metro stations. They often tell a historical story about the country, or simply just show street signs, house numbers or whateva. As I said, pretty much it can be found everywhere. And if you feel like you haven’t seen enough while walking around in the city there is a National Azulejo Museum. 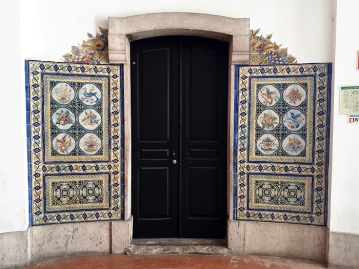 We found our way to Padrão dos Descobrimentos which is a huuuge monument on the coast side. For my English readers: the Monument to the Discoveries. The main statue contains 34 other smaller figures of Magellan and other important people in Portugal’s history from the age of discoveries, such as poets, explorers, navigators, and mapmakers. 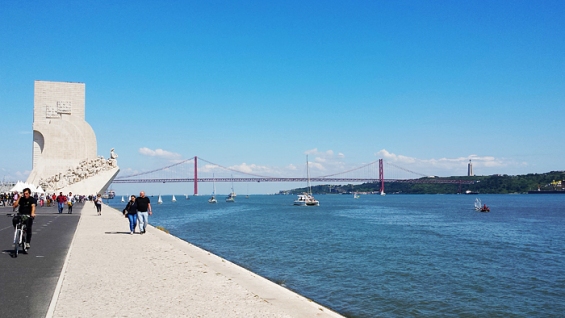 The next stop is Torre de Belém, the doors are opening on the left side
… probably the downside of our whole trip. I will tell you something right now, something that we didn’t know and it would’ve been so useful. Buy a combined ticket for Torre de Belém, Jerónimos Monastery and the National Museum of Archaeology. Or buy a Lisbon Card which can be used for up to 3 days. Or buy all the tickets separately online but print them out. Please.
Storytime: we booked our ticket online to Torre de Belém. We got the confirmation email with all the details and codes and everything. 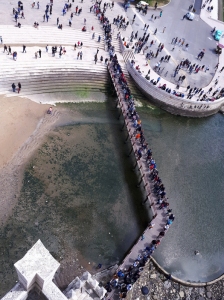 As you can see in this picture, you will find a massive queue in front of the tower. There’s 2 actually. One is for online bookings, and the other one is for the people who have none – which is the long queue. So we were queueing in the online buyers’ queue – I just love this word: queue – We showed the email to those lovely ladies, and they didn’t let us in, saying we have to print the tickets out. Even though the email said nothing about this. They were very rude and very unhelpful. At one point my friend said she doesn’t even want to go in anymore.

…I was ready to slap someone with a F-ing shovel…

But I was like if we bought the tickets, let’s find an internet cafe and print these shits out, so they gonna have 2 extra pieces of paper to throw away. By the time we found one, the time passed by, and the ladies said the last tour is already in the tower, we missed our chances.
I was ready to slap someone with a fucking shovel.
At least they had a last drop of humanity in themselves and said we can come back tomorrow, and they will let us in. Long story short: we managed to go in next day. They DIDN’T EVEN TAKE the tickets just took a quick look at it. And the tower is nothing major it’s not worth the fuss like… at all. Or maybe I feel this way because of all the shit happened. 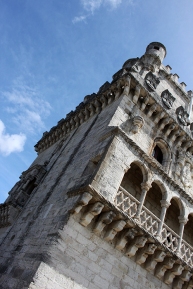 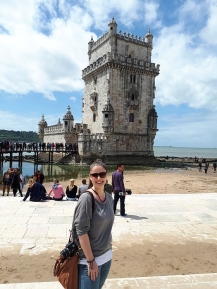 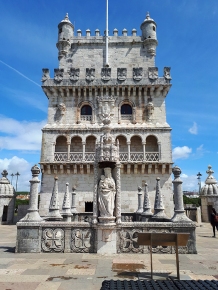 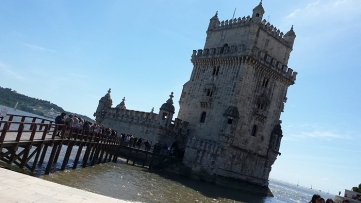 We had a lovely lunch though, and a strong drink – or two – after this incident in a restaurant called Bar 38° 41′. The food was amazing, the drinks were well made and the service was fast and friendly…
We continued our day to the Jerónimos Monastery.
Look, I have to admit that I’m not really a church and museum lover type of tourist, but this building was mesmerizing. According to Wikipedia, it was classified as a UNESCO World Heritage Site, along with the Tower of Belém – whateva. – in 1983.
They started to build the monastery in 1501 and finished 100 years later. Mindblowing, really.
I will just leave some pictures here for you, please, just take a look at all the little details… 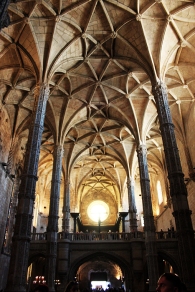 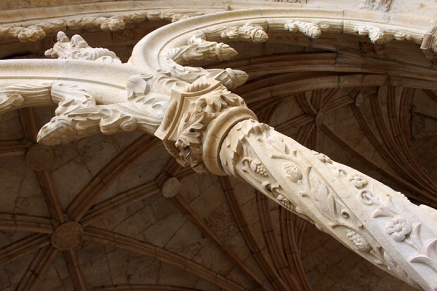 After all the sightseeing and walking around we decided to have some tapas for dinner. We found a cute little restaurant called Casa da Praia Tapas Bar & Wine Bar. The service was amazing, they were nearly closing, but the loveliest lady on Earth – I’m guessing the owner – said we are welcome to sit down and have our dinner in no rush. Amazing customer service, the food was lovely as well. My friend is some sort of a vegetarian, but when she saw the meat plate she said: … 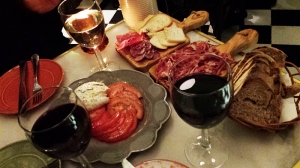 … Stay tuned for much more in Pt. 2 …
– most amazing sunset I’ve ever seen
– the edge of the world – according to people from the 14th century
– Sintra, Cascais, Jesus … and a sardine. 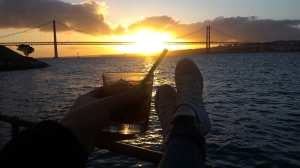