Getting there! We are halfway through my Mexican Adventure Series. If you haven’t seen it already, you should go check out Part 1 and Part 2 immediately. Then click right back to here cuz I’m about to show you a real Paradise and share another bucketlist moment with you. So, go. Read about Playacar, Valladolid, Chichen Itza and swim in a cenote.
Till then, I will be right here waiting for youuu… ♪♫

Needless to say, I fell in love with Tulum. We spent 3 days there, it was nothing. But we tried to explore as much as it was possible. The most important bit was obviously the ancient Mayan ruins. It was one of the top bucketlist moment for me, straight after Fernando de Noronha. We spent some time in the city too, had a beach walk, spotted Matcha Mama, and I ended up in a hospital – cuz, of course, my kidney had to give up on functioning in the middle of fucking nowhere in the Mexican jungle. Hi, and Welcome to my Mexican Adventure Series…
I remember my sister told me ‘oh you gonna see the bubble gum cotton candy resort dreams only in Mexico and that’s not the reality…’ blabla fair enough, pretty hard not to love waking up like this every morning … 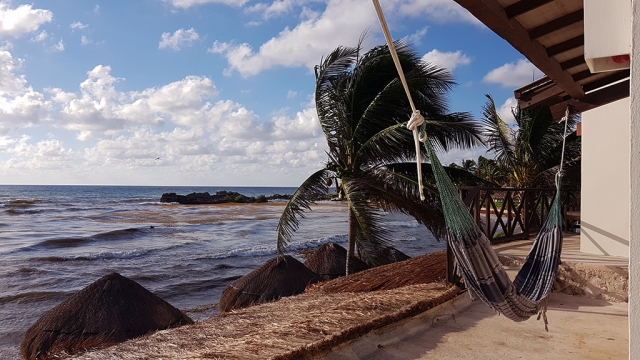 … But I actually really enjoyed the city vibes too, the dusty colorful streets. The music from everywhere and the smell of the food. I don’t know as we were walking around I felt like… hmmm… I could live there. It wasn’t too touristic – or maybe we just got the perfect timing in those days… – it was quiet but not dead, it just felt so perfect yet so real.

The town is situated like 120-ish km away from Cancun, there’s a direct bus that helps you to reach your destino. You will get a 1 and a half hour bus ride for like 180 peso which is 7£. The bus is comfortable, air-conditioned and they were even showing 2 movies on board – which I wasn’t expecting at all. 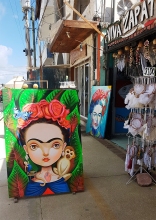 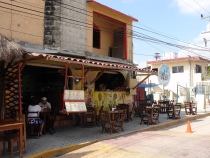 What I noticed and not just in Tulum was… Fuckin’ hell the taxis are literally everywhere and people are using them like crazy. We took a taxi many times too, I’m not gonna lie… You know me, I love walking around, exploring. I froze to death in Paris rather than using the subway – And I loved it.  But because of my e… –  nah… whatever… let’s call him my ‘belated travel buddy’ from now on instead of anything else. So he didn’t want to walk much or rent a bike either… Sooo this is why we were using mostly taxis. They don’t have meters, so it can be a rip off very easily. It’s all about tourist – not tourist – speaks the language or doesn’t. I was with a Mexican who was able to negotiate. So one ride from our hotel to the centro,  or to the archaeological site was 100-150 peso. Still a rip-off? No idea… let me know in the comments below. My mind works with Brittish pounds, and I clearly remember one situation when I actually converted back and forth, and it turned out that a bottle of Corona is 0.40£ – the casino where I work is selling it for 4.20£. 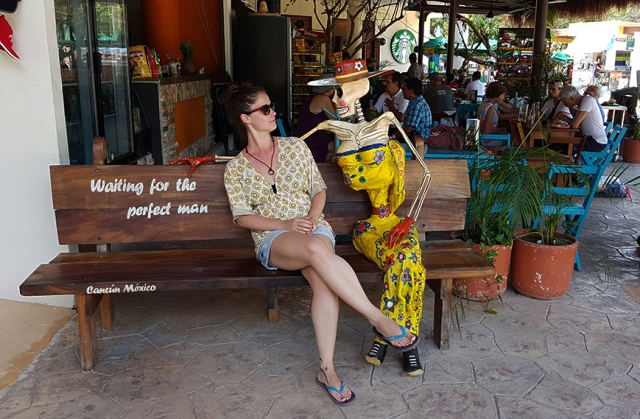 2km from the town center the Zona Hotelera begins, which is the more touristic part of Tulum. It’s a road aaall the way next to the beach, surrounded by nature, the ocean. You can find many restaurants, beach clubs, and hotels built in the traditional Maya style with thatched palm roofs. Mostly boutique hotels and cabañas, although there are some high-end hotels as well. But still, luckily, you don’t have that ‘Cancun’ vibe at all… 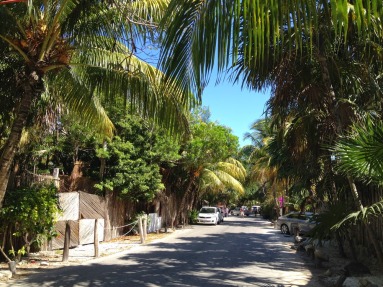 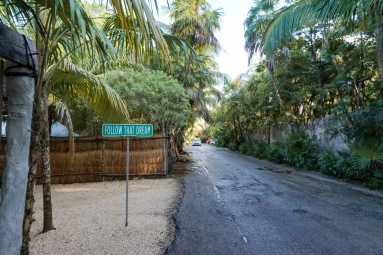 As you walk around in the area you will get a bit of a jungle experience, which I personally loved. No stalls, no shops, no souvenirs, no shouting… Nothing like it was around Chichen Itza… here all you will find is just the sounds of the jungle… And of course the most important photo op, next to the cliff with the ocean and the ruin in the back? Yea, I have my own now, but let’s leave that for the grand finale cuz it is breathtaking, for real. 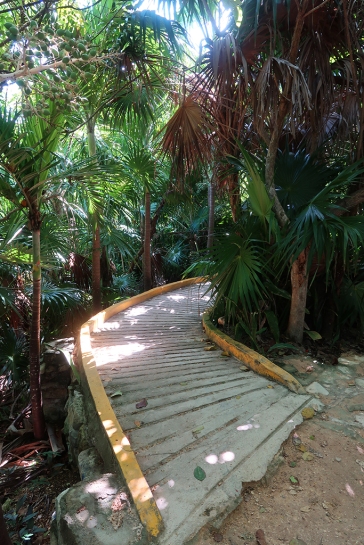 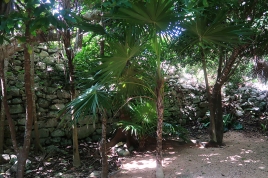 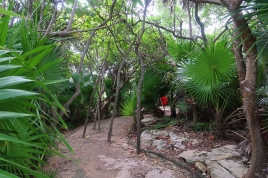 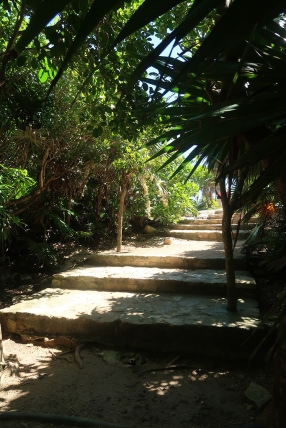 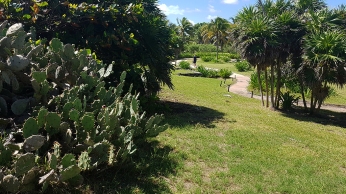 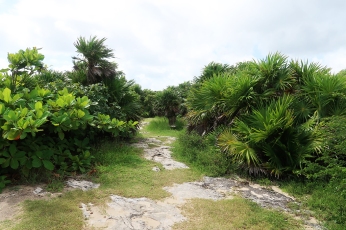 Tulum is a Mayan ruin city up in a 12 m tall cliff facing the Caribbean sea. The Mayans probably named their city Zamá, meaning ‘Place of the Dawning Sun’ as it was the first places in the Maya kingdom to get the first sunlight each morning. Also, the name Tulum means ‘wall’ in Mayan. Tulum was a major trading and religious center, and one of the best-preserved coastal Maya sites we can find these days. Protected by the sea, the jungle, and a huge wall around, the site survived the Maya collapse and was left pretty much untouched by the Spaniards. 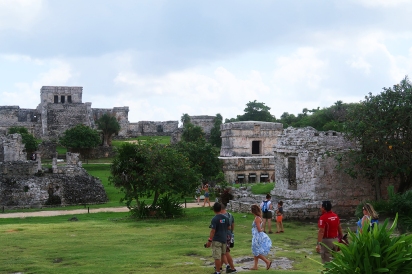 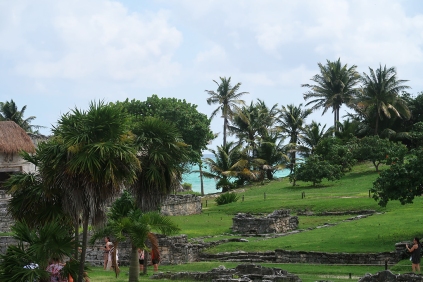 The most important feature of Tulum is El Castillo. At first, archeologists thought it’s simply a temple, with steps all the way up to a shrine on the top. Later on, they realized it has a tiiiny bit more to it… – just the usual Mayan magic I already told you about in the post about Chichen Itza. It was actually a lighthouse, sending navigational signals to the canoes that the Mayans used for trading with other civilizations while sailing up and down the coast. There are small windows on top of the shrine, and it fits perfectly with a gap in the barrier reef that was close to the coast. During daytime, the sky is visible through the windows so the canoes could navigate by keeping the same amounts of light in each. At night the windows were lit up to guide them safely to the beach. 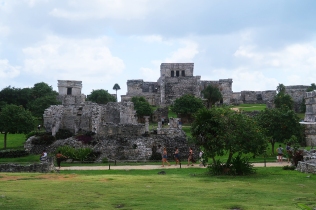 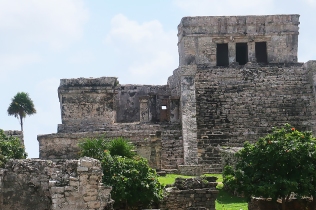 Yeah, genius… we already know that.

Next to El Castillo is the Temple of the Descending God. Above the entrance on the wall, a  figure of the “diving god” is still preserved. The sun rises exactly through the temple on the summer solstice – 21st of June- which is the longest day of the year. Mayans were crazy obsessed with the movements of the Sun and they were fucking mathematicians and predicted almost every astronomical event.

Temple of the Frescoes is one of the most detailed and unique part of the ruins. It was forbidden to go in, but inside on the walls, you can find many frescos,  perhaps it is the finest and most preserved examples of Mayan artwork, still remaining. It was also brightly colored and decorated on the outside aswell, here and there you can still see some of the original colors. And the craziest details are probably the red handprints on the wall. 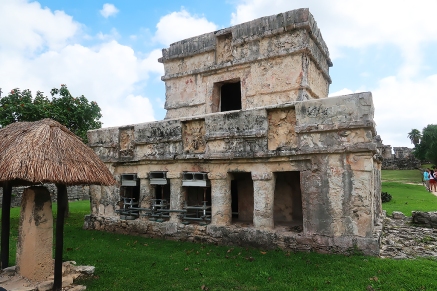 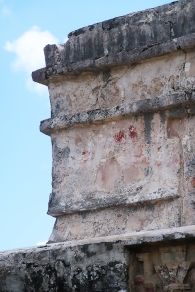 Few more pictures around the area… 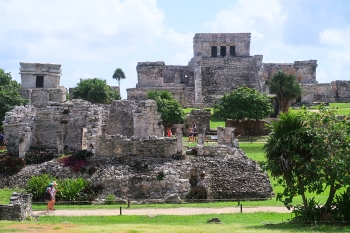 Tip: bring water. It’s super hot and dry, and people are literally fighting for the shadowy places… Once you are in, you are in. There’s no shops or anything like that inside.
Entrance fee is 70 pesos. If you are a Mexican it’s a different price and free on Sundays – ?
You can pay for a guided tour, which I personally recommend. The tour guides have amazing knowledge about the place, the buildings, and history. The price is negotiable again, depends on the day, the hour even on the weather… but I would say it’s sitting somewhere between 300 – 600 pesos. It takes around 1 – 2 hours to walk around, you can take all the perfect pictures, and if it’s not forbidden on the day of your visit, you can swim in the ocean too at Paradise Beach.

Speaking of the beach… As I said I saved the best for last. 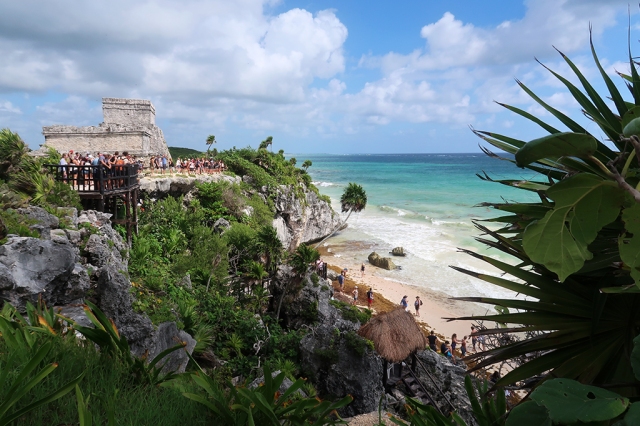 …Dream until your Dreams come true…